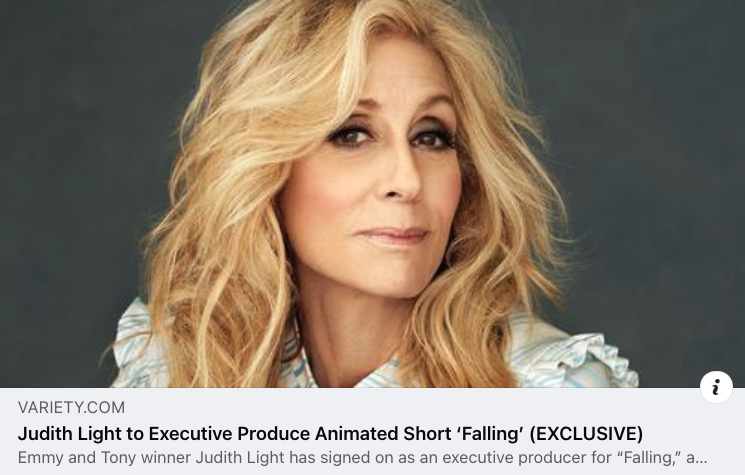 Emmy and Tony winner Judith Light has signed on as an executive producer for “Falling,” an animated short film from the filmmakers behind “Kapaemahu” — Daniel Sousa, Dean Hamer, Joe Wilson and Hinaleimoana Wong-Kalu — which was shortlisted for the best animated short Oscar in 2021.

While “Kapaemahu” focused on Hawaii’s legendary gender-fluid healers (and expanded into a children’s book, feature documentary and immersive museum exhibition), “Falling” follows the romantic adventures of a valiant island warrior, a handsome young man and an octopus brought together by a twist of fate. The story is described as “an epic romantic adventure that instills hope in a time of rising prejudice and hate.”

Directed by Oscar-nominated animator Sousa (who also designed the film), Hamer and Wilson, Light is joined as an executive producer by Daniel Karslake, whose work “addresses the intersection of spirituality and social justice,” and Hawaiian teacher cultural leader Wong-Kalu, who has collaborated on six previous projects with married producing partners Hamer and Wilson.

“This is a tale of the spirit, transformational and mystical in nature that resonates with love, courage, compassion, and community,” Light said in a statement announcing she’d boarded the project. “I am honored to be a part of this transcendent film that brings an inspirational message that love is love when it is so profoundly needed.”

Set in an imaginary world where “courage has no limit and love has no bounds,” the film’s synopsis details the story: “An island warrior fighting off invaders of his idyllic home is wounded in battle and falls deep into a mysterious underwater world. When the octopus who rescues him transforms into a captivating young man, sparks fly, and the adventure begins.”

“The beauty and artistry of the animation and magnificence and majesty of the music gives the film a radiant quality,” Light added. “’Falling’ is profoundly universal and hopeful, a testament to bravery and the power of following one’s heart.”

A multiple Tony and Emmy-winning star of television film and the stage, Light can be currently seen in HBO Max’s “Julia,” Starz’s “Shining Vale” and the Searchlight Pictures movie “The Menu.” As an actor, producer and advocate, her body of work is also known for helping to advance LGBTQ visibility and acceptance with roles in such projects as “The Ryan White Story,” “Save Me,” “The Politician” and “Transparent,” Amazon’s groundbreaking series which helped bring mainstream attention to the transgender community. For her performance, Light was earned Golden Globe, Critics’ Choice and two Emmy nominations.

“We are so thrilled to have Judith’s support behind this story,” stated Hamer. “The paths she has forged in her career and the passion and unending dedication she has always shown to uplifting the queer community create a unique opportunity for us to do something very special with this film.”

Of collaborating again with Sousa and Wong-Kalu, Wilson noted, that it was “the perfect way to bring to light a positive story of the power of love — especially a love like ours.”

“Falling” was produced by Hamer and Wilson’s Qwaves Media in association with Kanaka Pakipika, the production company the couple formed for their pan-Pacific collaborations with Wong-Kalu. The short will be released in 2023. The first trailer, which spotlights Sousa’s focus on mythological and legendary themes in his world-building, can be seen above.