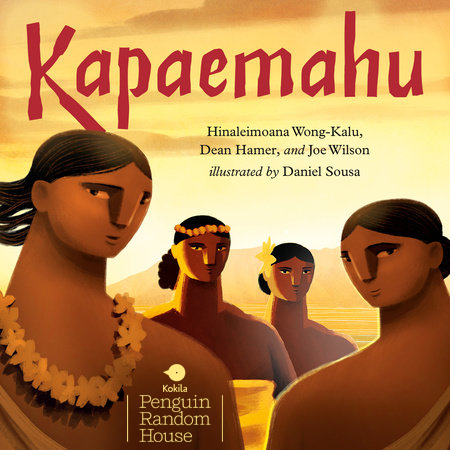 Every day, thousands of Waikiki tourists overlook a monument of four massive stones on Kuhio Beach, encircled by a low iron fence, walking quickly by to take photos of the legendary Duke Kahanamoku statue next to it.

Few will stop to read the plaque describing the Healer Stones of ­Kapaemahu, imbued with healing power by four Tahitian kahuna or wizards, over five centuries ago. Yet if they did, the plaque fails to mention that the healers were “mahu,” a Hawaiian word for those who are both male and female in mind, body and spirit.

Their gender duality was intrinsic to their healing power, but the plaque omits this vital piece of information after suppression by Christian missionaries and decades of social and political censorship, say the co-authors of a new children’s picture book, ­“Kapaemahu.”

“It’s a great loss. A deep shame,” they write. “For only when you understand the true history of these stones shall you behold their living power.”

The book, just released, is the first-ever U.S. publication in both English and Olelo Niihau, the Niihau dialect of Hawaiian, said co-author Hinaleimoana Wong-Kalu. Identifying herself as “mahu” or transgender, she is a Native Hawaiian teacher, filmmaker and an activist for gender minorities.

Her co-authors include Dean Hamer and his partner, Joe Wilson, both Emmy Award-winning filmmakers, who have collaborated with Wong-Kalu to make five films on transgender people and society’s outsiders. The book is based on their latest film, “Kapaemahu,” released in 2020 and shortlisted for a 2021 Oscar. It is illustrated by Daniel Sousa, an Academy Award-nominated animator.

The book, released by Kokila, an imprint of Penguin Random House, coincides with a Bishop Museum exhibition on “The Healer Stones of Kapaemahu” that will run until Oct. 16, also a collaboration of the three co-authors. The story was based on a Hawaiian legend, passed on orally over generations, but first published at the turn of the 20th century by James Aalapuna Harbottle Boyd, who used the term “wizard stones.”

Hamer said it’s especially important now that the story be known by visitors and local residents alike “as we see this rise in prejudice and discrimination towards gender diversity.”

“This is such a good story for combating that. Imagine some kid, who is (gender) fluid or questioning, hears about this great story. I think it’s really great for them to have some place to go and say: Hey, that’s for us; we can be heroes, not just the butt of jokes or something worse,” he said.

Hamer said the authors didn’t intend to create a film aimed at children. They wanted to tell a universal story, a Hawaiian legend, in the most understandable way for people of all ages. However, film festival programmers, publishers and librarians felt it would appeal to younger audiences (ages 4 to 8), and Hamer sees the advantage.

“Children are always our best audience because they’re the ones who will pass the story on and are important for the next generation. And children are in many ways the most open-minded to this story because when they hear about these amazing people who are part male and part female, they’re like: Oh cool — that’s magic, that’s something wonderful! And they don’t have the preconception that it’s something that should be questioned or whatever.”

Wong-Kalu said she grew up hearing the word “mahu” used as a derogatory term. “I would like our people to de-weaponize this word,” she said.

People may affiliate the concept of mahu with the LGBTQ movement, but Hawaiian gender duality goes beyond the physical aspect, which was once an accepted part of island culture, she said.

“Why were they these amazing, wondrous healers? It’s because of their duality of the spirit, and the heart, and the mind.”

In the book, the description of the healers is elegant and simple:

Wong-Kalu said, “It’s important to tell this story for the purpose of uplifting Kanaka history, culture and language.”

It was not enough to tell the story only in English, but in the ­Niihau dialect, the only form of ­Hawaiian that has been continuously spoken since prior to the ­arrival of foreigners.

“For far too long, the narrative of history has been relegated to foreigners or those other than Hawaiian, who have been heavily colonized, and have articulated it through their eyes. I want my people to tell elements of Hawaiian history and be unafraid to tell it in its raw form,” she said.

According to the authors’ notes, the sacred stones fell victim to colonization, militarization and the growth of tourism, which led to drastic changes in Hawaiian life. In 1941, the stones were buried to make room for a bowling alley in Waikiki. When the bowling alley was demolished in 1963, a few Hawaiian elders insisted on the stones’ recovery.

Hamer said they were later moved a short distance, where they stand between the Duke statue and the police substation, to make way for a public restroom, their original location.

Although flushing toilets may not be the best backdrop to the stones, Hamer said the location works.

“In a way it’s very fitting that they’re there in the midst of millions of tourists. That was the original purpose; it wasn’t to make a prayer spot or healing spot, it was to make a monument so people would remember what these incredible mahu healers did.”

Hamer said he and the team are working with the city to update signage at the monument site to tell the complete story.

The highlight of the Bishop Museum exhibition is a three-dimensional artistic re-creation of the stones, lit from within and surrounded by four 30-foot-tall banners of the healers. It includes traditional healing artifacts and a timeline of the history of the stones. A separate room is devoted to the Glade Show Lounge, a former Chinatown nightclub featuring transgender performers, who were forced to wear buttons that proclaimed, “I Am A Boy,” to avoid arrest and fines in the 1960s. 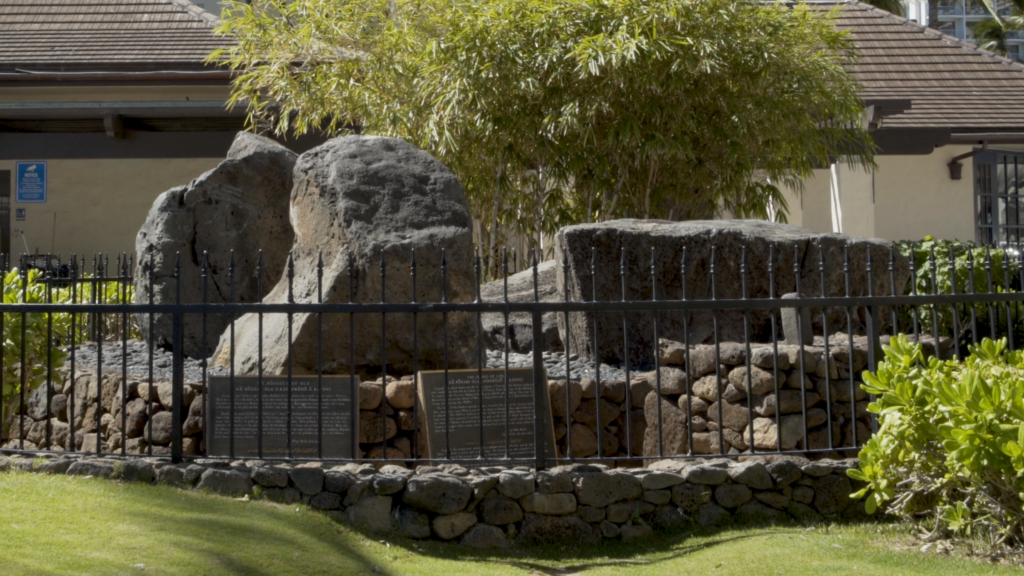