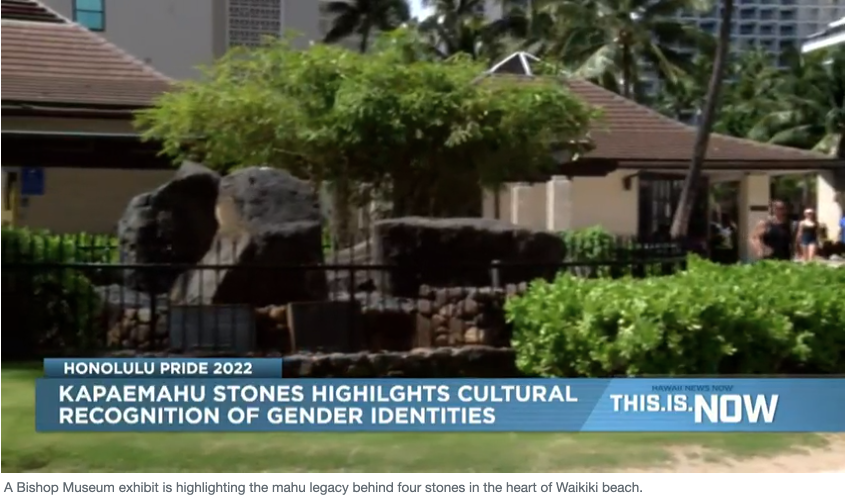 HONOLULU (HawaiiNewsNow) – On the side of Kuhio Avenue in Waikiki, four stones sit behind a black fence.

Thousands of people pass them every day.

“But those people, very few of them know the true story about what the stones represent,” Bishop Museum Historian and Archives Curator DeSoto Brown said.

“They are called the healer stones of Kapaemahu.”

“They were māhū. They were what we would call today transgendered, perhaps. They brought to the Hawaiian islands with them healing knowledge that they had and each of the four had specialized healing knowledge,” Brown said.

They requested four large stones be moved from Kaimuki to Waikiki.

“The four healers imbued their powers into the stones and then they vanished. Those stones are still present today in Waikīkī,” Brown said.

The stones have been documented throughout recent history sitting on the property of Archibald Cleghorn, who outlines their protection in his will.

In 1941, they were buried under a bowling alley that was torn down 21 years later.

They were moved a few times more until resting at their current location next to HPD’s Waikiki substation.

“Now, finally, they’ve been placed in a way that treats them with respect and that people can’t touch them or try to put things on them,” Brown said.

A Bishop Museum exhibit honors the story of the healers and the stones. It also explains that throughout the Pacific, genders other than just male and female are rooted in culture.

“People who were sexually different, who identify differently, who looked different we’re not the objects of scorn,” Brown said. “They weren’t pushed aside. They weren’t hated. They were accepted as part of the normal array of different types of human beings. And that’s very true for the four Kapaemahu healers.”

As the exhibit explains, part of the stone’s history has been covered up. Some suppress the fact the healers were māhū.

Brown says the purpose of the exhibit is to shed light on the full history of the legend.

“We talk about healing we talk about the development of Waikīkī. We talk about entertainment. We talk about all kinds of things. So if somebody walks out of here having learned just one thing, whatever it may be, then we succeeded,” Brown added.

He also hopes people will come to understand being māhū is a powerful cultural identity.

“There are people that are māhū, and there always have been, and there always will be,” he said. “Yeah there are these people — don’t hate them, don’t destroy them, just accept them as part of everything that we are as humans,” Brown said.

The exhibit will be open until Sunday Oct. 16. After that, parts of the display will move to its new permanent home at the Hawaii Convention Center.